Today I am sharing the last batch of samples I made with the new release from AALL & Create. There are new stamps from Bipasha Bk, Autour de Mwa, Tracy Evans and Janet Klein and also new washi tape by Bipasha and Janet; it is very cool. They are presented on Hochanda this weekend and I made some samples..

So here are the samples which were made with Janet's new stamps. 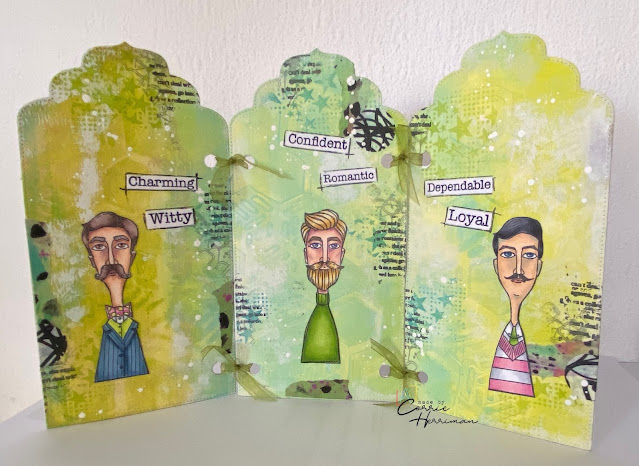 This triptych is made from three tags I added together with some ribbon. The background is gelli printed with acrylic paint and stencil #106 Interconnect.
The gents are new by Janet #463 - the Gentlemen. I also used 2 new washi tapes by Janet #19 - Wishi Washi and #18 - Poets. As background stamps I used #485 - Reverse stars by Autour de Mwa (new), #470 - Scripted diamonds by Bipasha (new) and #338 - Background Noise by Janet. 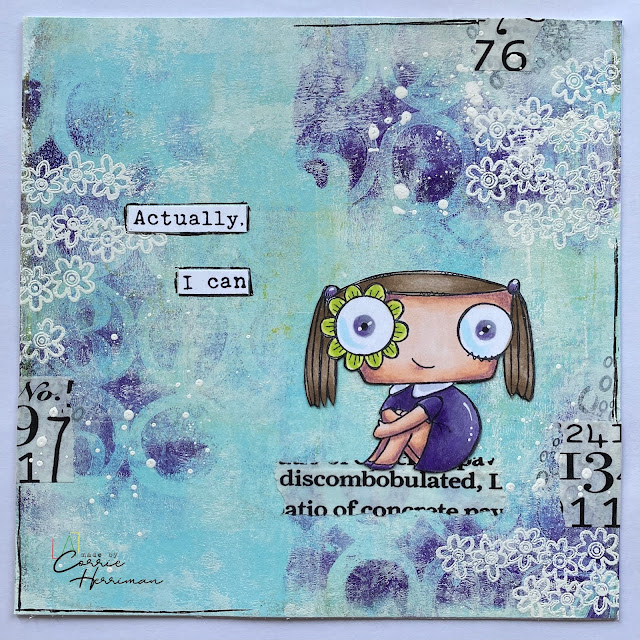 This 6 x 6 journal page was made with the gelli plate and stencil #101 - Secret numbers by Autour de Mwa. For stamping the background I used #472 - Scripted Ovals by Bipasha and the little flowers come from the same set as the girl #479 - Confident by Janet Klein. I also used some of Janet's new washi tape #17 - Mix & Match. 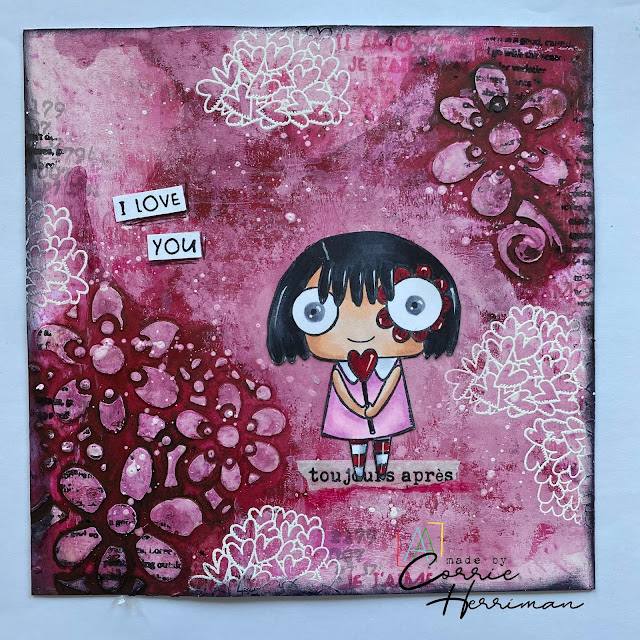 This journal page was made with modelling paste and stencil #118 - Saturday Morning by Janet Klein. I then added pigment powders and water until I was happy. I stamped the background with #338 Background noise and the little white hearts came from the same set as the girl : #481 - Lil Love. I also used some washi tape #18 - Poets by Janet. 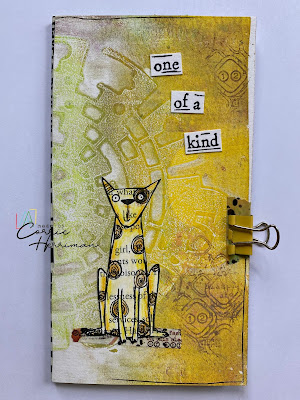 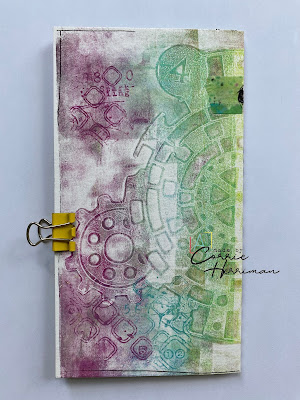 This is the front and the back of a mini book I made with Janet's new set #465 - Tall cats. The backgrounds were all made with acrylic paint and a stencil on the gelli plate. I used stencil #115 Spiral Checked by Bipasha. 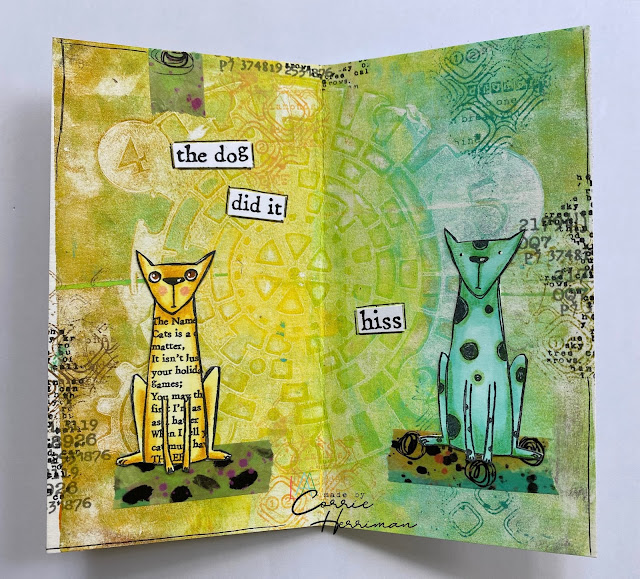 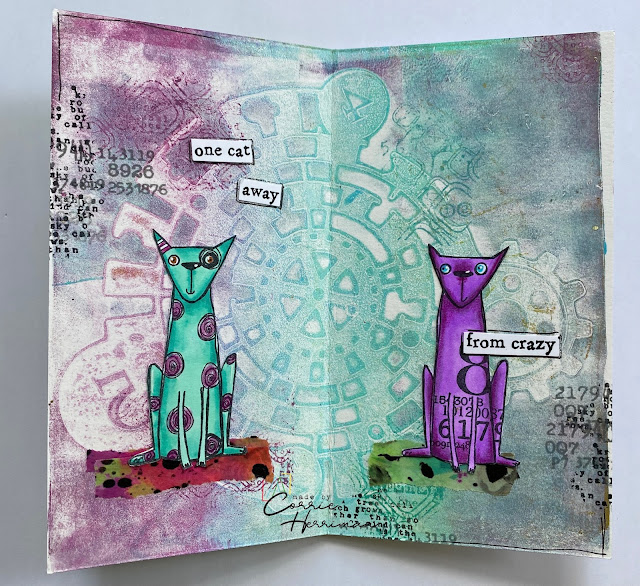 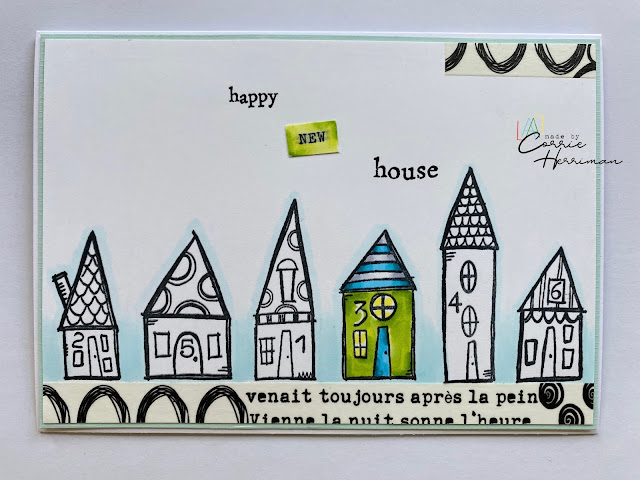 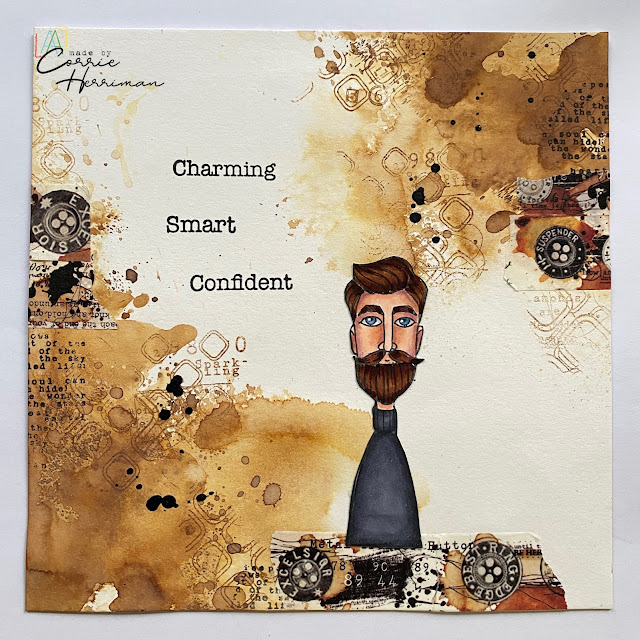 Another 6 x 6 journal page. This one is made with Distress Oxide ink Vintage photo. Along the edges is Bipasha's new washi tape #13 - Fasteners. I again used #338 Background noise (easily my fave background set by Janet) and #470 - Scripted Diamonds by Bipasha for the background stamping. The gentleman is from set #463 - the Gentlemen by Janet.

A tag, made with ATC coins. These are just one layer stamped and coloured. I used set #478 - Choose Happy by Janet for the girls, which are all the same, just coloured differently.
For the backgrounds I used #338 - Background noise and #470 Scripted Diamonds by Bipasha. I matted the circles on to bigger circles from black card stock and then glued them to a piece of pattern paper. 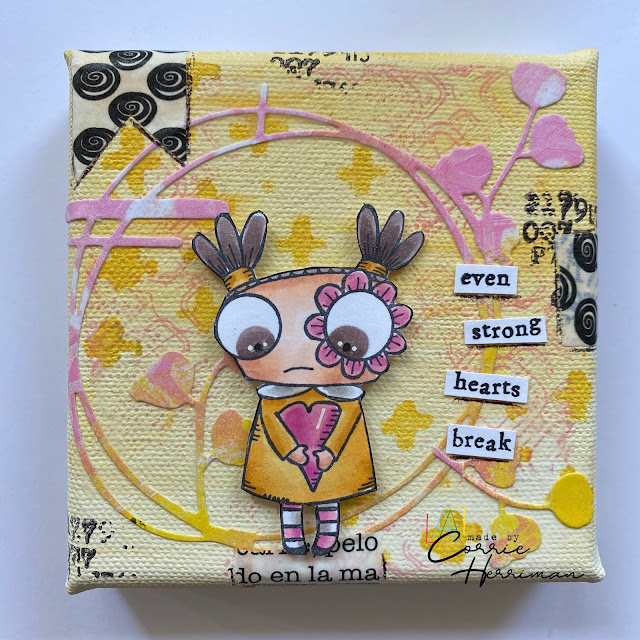 This is a mini canvas which measures 4" x 4" or 10 x 10 cm. I used acrylic paint to give it some colour and used a stencil #97 - Starry night by Janet to add some interest.  I added a die cut made with Die #13 by Bipasha and stamped randomly with #470 - Scripted Diamonds by Bipasha.  I also used washi tape #17 - Mix & Match and #18 - Poets both by Janet. The little girl is from stamp set #478 - Choose happy; there are two girls in this set, a happy one and a sad one.
Of course all these stamps, stencils and washi tapes are available from Country View Crafts!
Thank you for stopping by today !
Corrie xx
Posted by Country View Challenges at 17:51 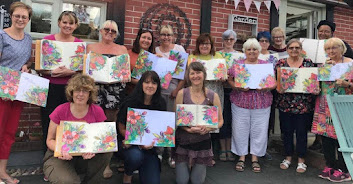